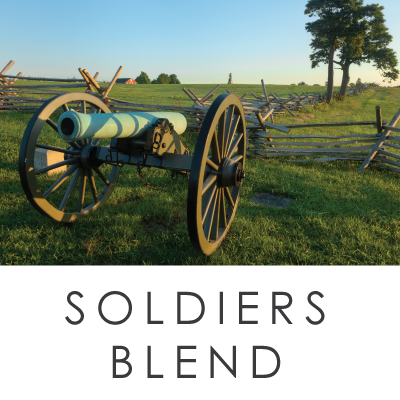 We are placing this coffee on sale leading up to Veterans Day as a way to celebrate those who have served us so well.​

Soldier's Blend, a blend of light and dark roasts for a greater depth of flavor with a smooth finish on the swallow. This edgy brew has a fruity aroma and a unique taste.

In honor of this battle and the soldiers that fought there Furnace Hills Coffee Company has created a Soldiers Blend. Coffee was essential during this war. Coffee and hardtack were the two foods the soldiers could count on that wouldn’t spoil and could be easily transported in a haversack.

After careful research Furnace Hills Coffee decided on an Ethiopian coffee bean. Part of the blend is a dark roast and part a light roast. This was done to do our best to replicate the coffee roasting conditions and practices on the battle field. Coffee was roasted in a frying pan over an open camp fire resulting in an un-even roast. There is no bite at the end of the swallow, but it stays with you for a while after drinking.